In Memory of Stephen P. Goldman

He was our founder, our leader, our mentor, and our dear and trusted friend. 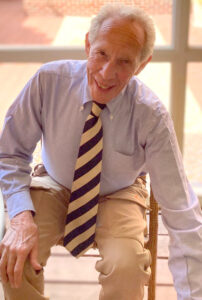 It is with deep sadness that The L’Enfant Trust’s Board of Trustees announce the passing of our Founder and Trustee Emeritus, Stephen P. Goldman.

From the Trust’s inception as an easement holding organization seeking to protect Washington’s historic neighborhoods to the Trees for the City and Historic Properties Redevelopment Programs, Steve has been at the heart of the organization.

Steve Goldman was raised on the northern edge of DC near Chevy Chase. On his way to school downtown, Steve would marvel at the magnificent old row houses that lined the streets. As much as the Capitol dome, the White House, and the national monuments, it was the stateliness of these Victorian homes that convinced Steve that his city, Washington DC, was unlike any other city in the world.

After graduating from law school and working in other areas of the country, Steve returned home with his family and purchased a row home in Dupont Circle in 1976. He enjoyed strolling along the cozy streetscapes of the area’s historic row houses and storefronts during his daily dog walks.

At the same time, waves of unrestrained development were engulfing and transforming some of the city's historic neighborhoods. Washington was experiencing midnight demolitions, the razing of entire blocks of historic townhouses to make room for higher-occupancy rectangular boxes. The march of downtown development seemed relentless as older and smaller structures, some with deep roots in the city's history, were being torn down.

As a tax lawyer, Steve knew of a legal provision known as a conservation easement, whereby the owner of a property could donate the right to alter its historic appearance, including the right to raze the building or increase its height.  In exchange for this gift to the street of a preserved historic structure, the property owner was entitled to a tax deduction. To help encourage this voluntary preservation, Steve and his law partners, Charles Auster and Lane Potkin, incorporated the process of preserving historic structures using conservation easements into a tax exempt 501(c)3 charity in 1978, named The L’Enfant Trust, in honor of the planner of the federal city.

Whereas previous preservation activities were centered on museums and historic sites, The L’Enfant Trust focused on preserving vital, livable neighborhoods for future generations, or in the language of the Trust’s charter, to "promote a public aesthetic in land use planning.” The Trust's role was not to prevent change but rather to mediate it. Steve believed in balancing the virtues of preservation with the needs of modernization, recognizing that neighborhoods and buildings, like their inhabitants, are dynamic and that over time change is both inevitable and desirable.

Thanks to the thought leadership, vision, and tireless work of Steve and Carol, his beloved wife and President of the Trust for over 20 years, The L’Enfant Trust is the largest easement holding organization in the country, with 1150 protected historic properties. In every way, Steve and Carol were priceless gifts to each other and to all of us.

Steve -- thank you for sharing your intelligence, virtuousness, and grace with us and for helping to make Washington, DC a place to cherish and call home now and for generations to come.